In George Orwell’s 1984 there was the Ministry of Truth “which concerned itself with news, entertainment, education, and the fine arts.” While the Board of New Hanover County, North Carolina, can hardly be compared with that institution, it seems that one commissioner, Chairman Woody White, is trying to change that. Upon hearing the announcement of a performance in the County, he used a Facebook post to attack entertainer Whoopi Goldberg for the thoughtcrime of being critical of President-elect Donald Trump, stating “I think having her here is a horrible idea.”

Well, I think Chad Essley sums up my thoughts nicely in this cartoon: 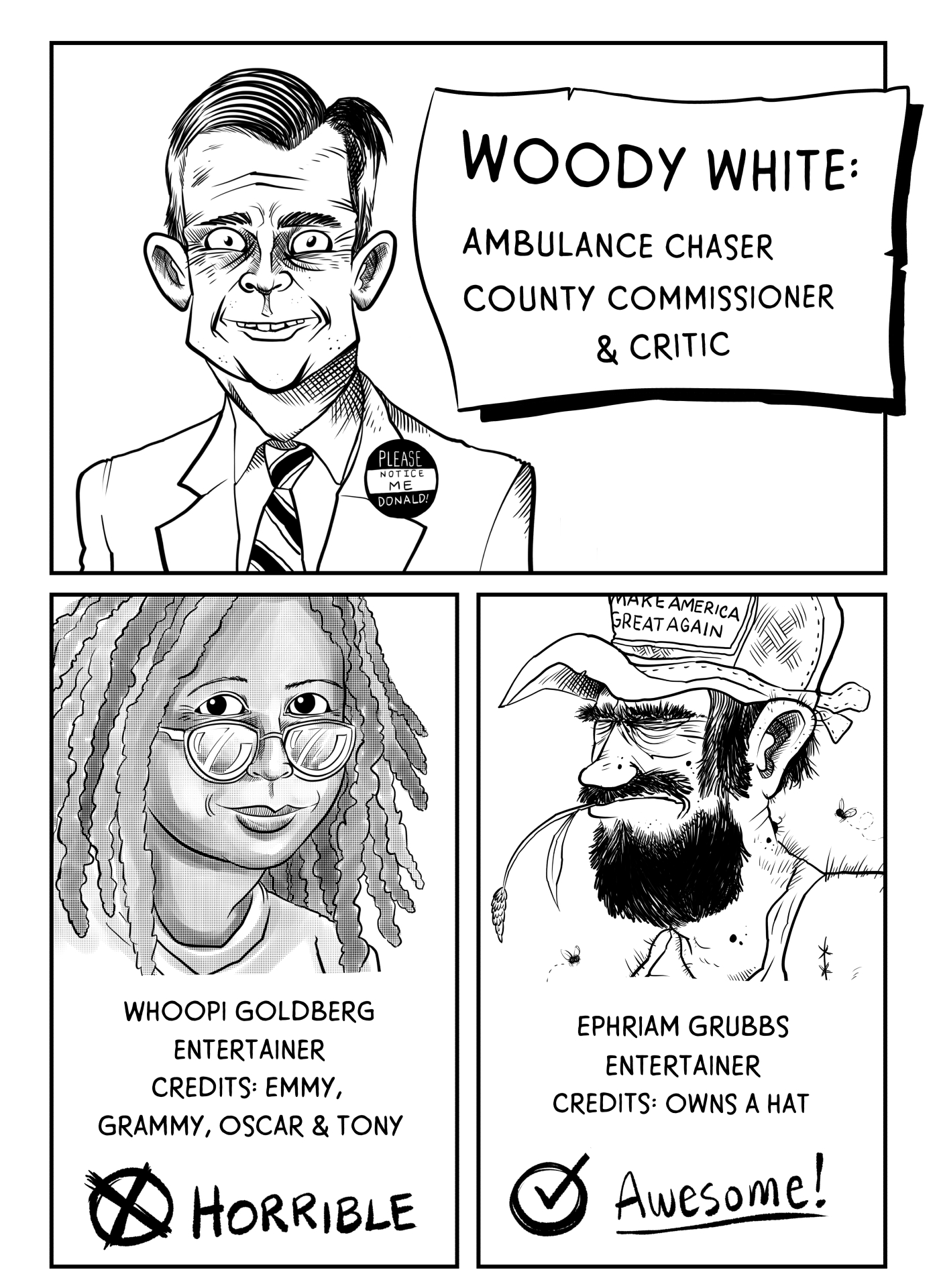 Now I’m not sure what are Mr. White’s credentials in his chosen field (I believe he is a personal injury lawyer) but Ms. Goldberg’s are impeccable. She is one of only twelve people to have won an Emmy, a Grammy, an Oscar and a Tony award (EGOT), and only six of those are still alive. Bringing her to New Hanover county provides its citizens with an extremely rare opportunity to see a performer of this caliber.

She will be performing at Cape Fear Community College, which according to White is “devoted to developing the workforce” and having her perform at such a venue is “terrible”. It seems that Mr. White has forgotten that New Hanover County has a large number of jobs focused in the television and film industry, which still provides significant employment despite the State Legislature changing the tax incentives and passing discriminatory bills such as HB2. If Mr. White was truly interested in jobs versus promoting his own political agenda, one would think he would be less eager to alienate the entertainment industry from New Hanover County.

Now, in all fairness, I am somewhat sensitive to see such a personal attack on Whoopi Goldberg because I adore her.

You have to realize that I grew up in an idyllic little town called Asheboro, and much like Mayberry there weren’t any black people there. Well, there were black people, it’s just that I didn’t interact with them. My school was completely white until fourth grade when busing integrated the schools, but it wasn’t until I went off to the School of Science and Math that I truly spent time with people of color and even made some friends. So it was watching things like Goldberg on HBO in her “Direct from Broadway” special that opened my eyes to racial issues, and plus she is just incredibly funny. More than that, while I appreciate people who can make me laugh, I love it when they make me think. She is one such person, and she was even in Star Trek for heaven’s sake. She’s in my top five list of people I want to sit next to on a cross country flight.

As I do not live in New Hanover County, people like Mr. White might ask me to mind my own business, so I want to point out that I do own a house in Wilmington and have sent thousands of dollars in property taxes to the County’s coffers. But that doesn’t give me a say in how they are used, so I have to rely on the good people of that county to choose wisely. It looks like we are stuck with him through 2020, but I hope when that time comes people realize that his actions at a minimum come across as petty and at most cost jobs and devalue property. He has made New Hanover County something less that what it once was, and is preventing it from being the most it can be.

In the words of Dr. Martin Luther King “Nothing in all the world is more dangerous than sincere ignorance and conscientious stupidity.” It is up to us to remain vigilant to prevent 2024 from becoming 1984.

I live on a small horse farm in a somewhat rural section of North Carolina, and I can’t imagine living anywhere else. That is actually saying something, since I’ve been able to visit 45 of the 50 States and 36 countries outside of the US.

Unfortunately, I find myself more and more often having to defend the State I love from misconceptions people have about it brought on mainly by the actions of the State government, which for the last several years has been controlled by the Republican Party. What’s ironic is that they seem to think they are doing a great job, whereas in actuality they are denigrating the State’s reputation little by little over time. My friend Chad Essley was able to put that into a wonderful cartoon: 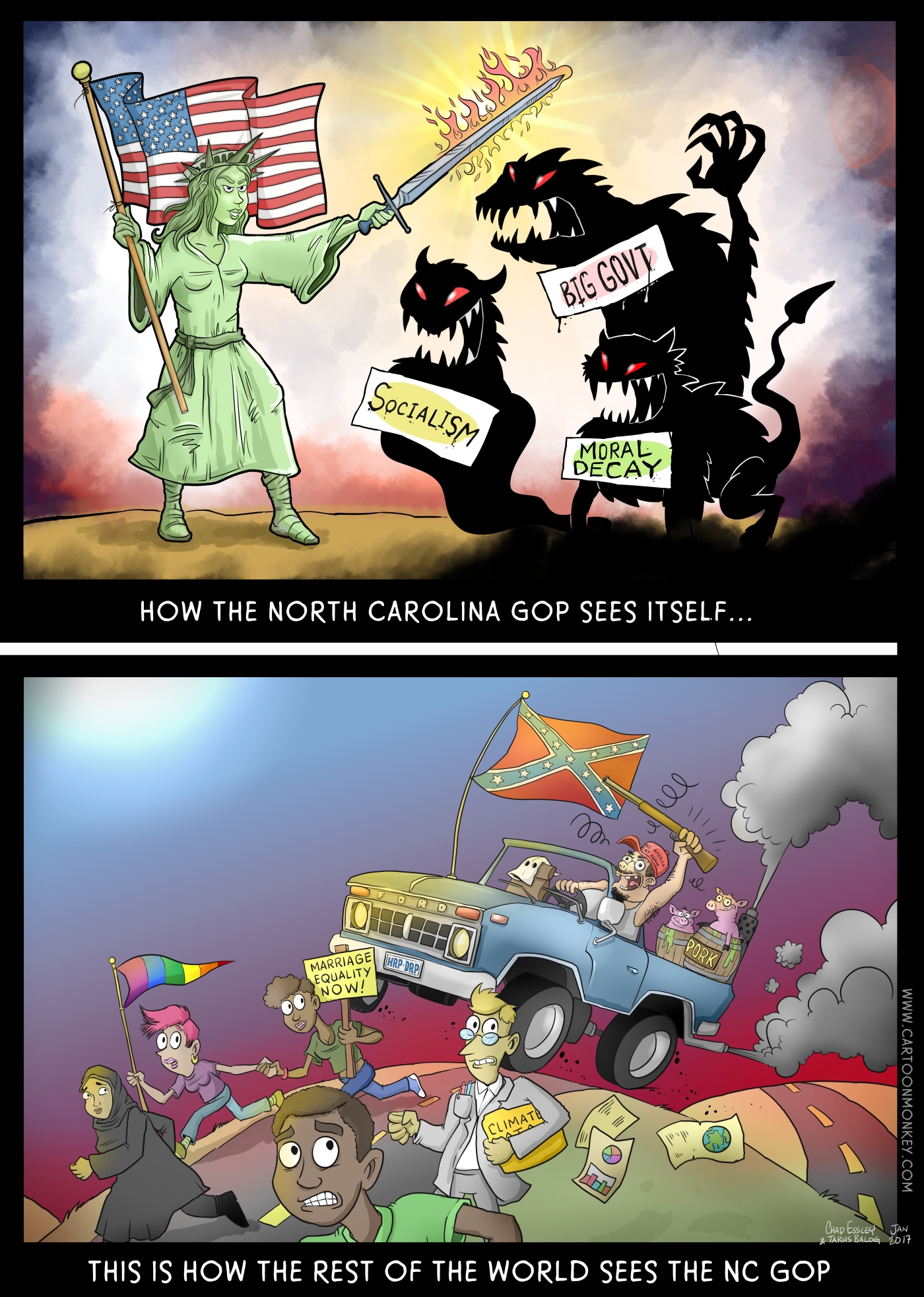 Now, people who don’t know me outside of my occasional posts to this blog might think I self identify as a liberal. I don’t. I consider myself a moderate who leans left on social issues and right on fiscal policy. The problem is that the right has moved so far right over the last decade or so that it makes people like me seem left of Jesus.

I don’t belong to a political party, but years ago I was a Republican. I grew up in a town called Asheboro in Randolph County, and it was one of the few counties in the State that leaned Republican. For well over a century the Democratic Party controlled all levels of the State government, but Randolph was like a little red island in a sea of blue.

I grew up in a time when North Carolina didn’t have a healthy democracy. The legislature was controlled by a sub-committee called “The Gang of Eight” and my friend Barry Yeoman has written a great article for the Washington Post that reflects on that time (go read it now, I’ll wait). I experienced it first hand as I served as a page in 1980 for the two Randolph County representatives, Frank Redding and Harold Brubaker.

I was in eighth grade when Redding came to our social studies class. He asked the question “what makes the North Carolina legislature one of the most powerful in the country?” I thought about it for a second and answered “because the Governor does not have veto power” which was true at the time. He remembered that and later nominated me to serve as a page, which was an eye opening experience. I spent a week at the back of the House chamber and in committee rooms watching how government worked. It wasn’t pretty. Smoking was still allowed inside and I can remember one page having to get medical help because one of the rooms was so filled with cigarette smoke that they were overcome.

Seating in the main chamber was based on political clout. Of course the Speaker, Liston B. Ramsey, sat up front, but Redding and Brubaker, being Republicans, were in the very back row on either side of the main aisle. Redding was the very proper elder statesman (and a true gentleman, not only did he sponsor me he also drove me to and from Raleigh) and Brubaker was the cut up. He would make me laugh while he held forth on how government really worked, which was quite different from what I was learning in textbooks.

So I watched with some wonder as over the next decade or so Republicans like Brubaker managed to partner with some disenchanted Democrats to break up the Gang of Eight, and he even served as Speaker of the House for two terms from 1995 to 1998. It was a good time in North Carolina politics, but as the Republican power base grew it began to change. A new crop of far right candidates got elected and now they seem to focus more on consolidating power than what’s best for the State.

For example, the GOP used to promote smaller government, but when a bunch of hippies (hippies I’m friends with) started making biodiesel out of used restaurant grease, that started to cut into the profits of a big donor who used to charge restaurants to dispose of it. So of course regulation was required, and a whole new department was set up to “license” grease collection. If you don’t have a license, you could face fines or jail. More recently, they enacted a new tax on services (labor used to be sales tax free in North Carolina). In true Big Government tradition, the law is complicated. If you get your HVAC system repaired, that is taxed. Get a new one? Those installation services are tax free. Fix your roof? Taxed. Get a new roof? Tax free. And in one ironic twist, it seems that housekeeping services are tax free. I guess the Raleigh fat cats don’t want to have to pay more for a clean toilet.

And this is on top of other embarrassments, such as limiting the access women have to healthcare or violating their privacy, or siding with a big energy firm over citizens when well water got polluted (something I’m sensitive about since my water comes from a well).

Then there is the voter ID act, which even John Oliver called out on national television as being racist (note, the link to the video has strong language). In the face of zero evidence of voter fraud impacting elections, the legislature passed a law (later overturned) requiring voters to show an “approved” ID at the polls in order to exercise their Constitutional rights. What got me was the official poster explaining it, in which the silhouette on the ID more closely resembles a person with an afro hairstyle than, say, most white people. 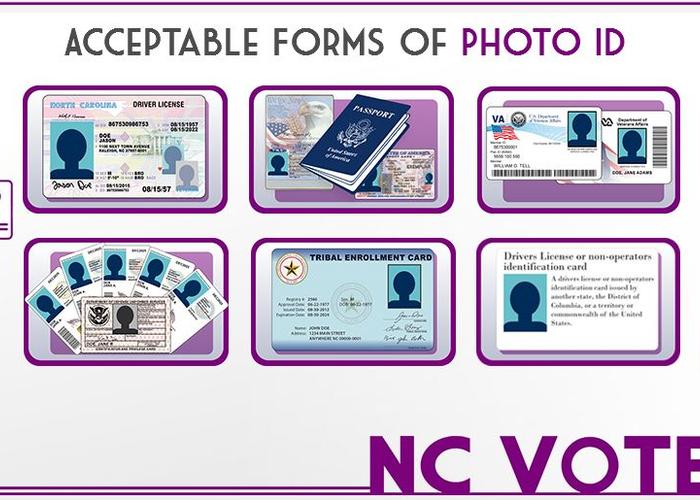 And of course, there is HB2, also known as the “bathroom bill” which, despite promises to repeal it, is still on the books. The bill is not only about bathrooms, but is a bold attempt by the Legislature to limit the power of all municipalities in the State and consolidate it in Raleigh. This gets worldwide press coverage, and it is sad that I have to explain that most North Carolinians are not like this when I’m in, say, England and the BBC is pointing out how backward North Carolina has become.

These actions are hurting our State, and I think it is a testament to how wonderful it is to live and work here that our economy is still managing to grow. One can only imagine how much better it would have been had Raleigh focused on all the people in the State instead of just a few.

There is a chance to change this. The voting district maps for the State have been found unconstitutional and new elections will be held, although the date of those elections is uncertain. I would love it if we, as citizens of North Carolina, would use this opportunity to bring sanity back to Raleigh, no matter the party.